Hitchhike in the name of poetry

There comes a time for every EVS-er to compare the prices of tickets, check blablacar availabilities and make the inevitable decision to hitchhike instead.
So it was a rainy Saturday morning when both of the Marias embarked on an istrian journey, and then…
… it started raining even more. Now, if it was only one Maria, you should know that journey was probably not gonna happen, for sure not the way it turned out, but having two of them, that gave it more shape.

We started with almost catching the bus we needed, getting off at almost the place that we wanted with the absolutely right mood. Almost without being wet, going to the highway, we saw this beautiful sign saying – NO AUTOSTOP !!! Beautiful, okay, so we stayed just in front of that sign, just before the highway, hoping somebody will actually go in our direction.
Funny thing, we barely got our thumbs up when a car stopped (even more cars were about to stop, but with the first one stopping they went their ways). It was a short moment of glory and excitement, because the driver just needed to check their direction and with a decisive gesture waved her hand telling us to go away and that she is not gonna take us anywhere. What can we do, Sveti Duh? We started singing… I had this song in my head that goes something like – wohoo, Im a rebell, Im a trickster… you know when you haven’t seen the lyrics and you somehow make them up, it was fun.
We had another car stopping, which was sadly also not taking us as the lady was going to Zapresic, but as they say – third time’s the charm – and it was! We had our third car and first hitchhike of the day – a guy from Varazdin, taking us from I-don’t-know-where-exactly-we-were to the ENTRANCE OF THE HIGHWAY!!!
Amazing!
Little did we know, that the rain is going to be so relentless….

As we stayed exactly in front of the toll booths we started getting really wet and I think we were looking very poorly, since the police car that was passing didn’t even bother to deal with us hitchhiking.

After a while we decided to go 50 metres after the toll booths and reach the nearby gas station to try and dry our clothes a little bit. Going there Marysia asked a driver there if he was going anywhere near Pula or Rijeka, but he said he was moving only 20km away. We decided to go through with this drying plan, but as we approached the entrance we saw two other hitchhikers. My, oh my, did I regret not having their attitude. They were UNDER the roof of the gas station, which means they were completely DRY and with a sign put on top of their backpacks casually 2rsaying Split. We had a quick chat, but my socks were so wet that we quickly went on inside.
Drying jackets, socks and trying to dry the shoes, in the big thunder-like sounds of the drier I heard a voice from behind calling “..uhm….girls…”. I figured at some point they were gonna ask us to stop abusing it, but no such thing. It was the guy from before, who figured he was actually going to Opatija and he offered us a ride to Rijeka !!!

Funny thing is that Marysia was actually wishing we can find people that are going Opatija, look around a little bit and continue from there. The rain didn’t really give us the chance to look around, but come on, what are the oats?
Speaking of odds… this car was just a saviour, we went in, told our poor-EVS-volunteers story, who are trying to go and support their fellow EVS-ers poetry event and we got to learn theirs – Alen, who recently quit his job in a famous cake shop and Maria, who is an experienced sommelier, were both going on an expo in Opatija. After a delightful conversation and a lot of care from their side, they said – no worries girls, you are gonna make it to Pula, if you don’t find transport until 6, we can take you after we finish work, so make yourselves comfortable, sit back and relax. And they turned up the music a little bit. Speaking of odds… can you guess which was the song? WOHOOOO, Im a rebel just for kicks … Portugal the Man – Feel it Still…. I think the message is clear – INmusic, we shall come.

We stopped on a big gas station after Rijeka and continued from there. We proceeded to the nearest toilet to further dry what was left, laughed a little bit with all the ladies that came in, and after went into the cafe for a cup of tea. Relaxing cup, cup and hummus later, with rejuvenated powers we continued. After an hour or so we finally found ourselves in a car with more than one free spot (big thanks to the lovely old couple with recycled paper minivan, who sadly only had one). Branko and Blaz, aged 27 and 25 were going to Pula for business. Working, working people, and we EVS are just travelling around. It was lovely. They showed us a little bit around, drove us in front of Arena and continued with their business.Thank you and good luck!

Safe and sound, and really, really hungry, we were finally in Pula, a town without rain. We agreed a proper celebration over tea and food is required, and after a short google consultation went almost straight away to Jupiter.
Ladies, enjoy!

that olive oil and bread.

Seriously. There is a reason Jupiter stands for abundance.

And what about the poetry night? We were finally there at 5, after a good meal and arrived right on time to relax and meet everybody. Irene and Dani were sitting in front of Rojc and with them we went in to… try to find Dnevni Boravak.

Written by Maria,
EVS volunteer in Zagreb from association Amazonas 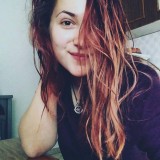 I am 19 years old. I was born in Estonia, but I am Russian. I am EVS volunteer.